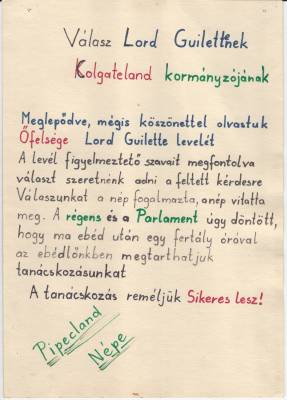 “Our whole summer was spent in an imaginary country that we nevertheless took completely seriously. Pipecland was a democratic monarchy, where the peak of the hierarchy was occupied by Aunt Eszter’s top assistant, the eldest room monitor, followed by the other room monitors and, cleverly, those who were the key personalities among the campers themselves. Pipecland had a booming economy: its members mined treasure and bought and sold valuables for the state’s official currency, the ‘mödi,’ of which everyone was given an equal amount at the beginning of camp. From time to time, our country was attacked by some enemy, and we had to organise a defense (and the counterattack, as well), or smugglers or counterfeiters would show up… never a dull moment. It was a tough society, though. There was no tolerance for people who wanted to stand apart from the collective.” (János Wágner Walger)