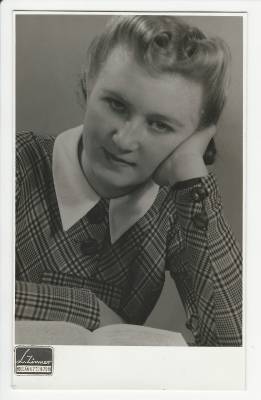 Eszter Leveleki was born on October 10, 1917 in Felsőgalla (today, part of Tatabánya). Her father, Andor Löventritt, was a chemist and director of a cement factory, while her mother, Julianna Molnár (nicknamed “Aunty Dudus”), was a teacher. In 1937, Löventritt, who was of Jewish ancestry, took up the Hungarian Reformed (Calvinist) faith. As one branch of the family had at some point been granted the nobiliary predicate “of Leveleki” (a title that appears in the 1897 novella Gavallérok, by Kálmán Mikszáth), in 1934, it was decided that this should become the family name of Eszter and her brother.

Leveleki attended school in Budapest, receiving her elementary and civil education at Lajos utca 34 and graduating with honours from Saint Angela Teacher Training College of the Order of Saint Ursula (in Hungarian Szent Orsolya) in 1936. Leveleki’s story is one typical of a Hungarian woman of the twentieth century: her pedagogical “faith” was developed within the framework of private institutions and philanthropic initiatives maintained by the middle- and upper-middle classes of Budapest. During the war, she was drawn into the illegal world of child rescue movements (working with Lutheran pastor Gábor Sztehlo, for example). Later, during the 1950s, she was declared “unfit to educate socialist children,” and prohibited from working as a teacher. Hence, in post-war Hungary, all opportunity of her engaging in activity of a pedagogical nature was limited to the private sphere. The camp’s status as a private venture in communist post-war Hungary, however, would generate both tension and excitement in the story of Leveleki’s life.

“I lived a happy, intelligent life – very intelligent, I think – that included work, play, joy, and sadness…, in short, everything a life should have. And the experiences! In many ways, for the ability to be myself in my work as a teacher, I have my parents’ home and the family atmosphere in which I was raised to thank.” (Eszter Leveleki)