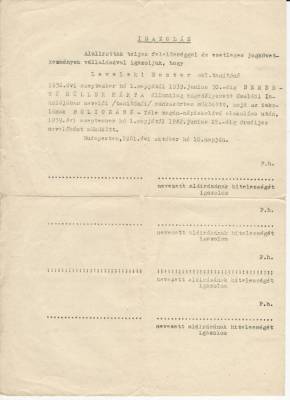 “The famous Márta Müller – most called her ‘Aunt Márta’ – was a student of Piaget who had actually worked with the master in the 1920s. After marrying a chemical engineer, she came home and continued her work at a private school at Tigris utca 41, bringing the spirit of the movement with her. She continued to run her educational experiment, which she called ‘Family School,’ throughout the 1930s. (...) The atmosphere of the school was familial, liberal, and high-standard. I’ll give you an example: the school by-laws, which were written by the children, were posted on the wall. If someone had a quarrel with another child or offended the community or its rules in some way, then it was not the teacher who delivered justice, but whoever had been elected judge for the week. Though the rules were generally immutable, if any particular statute seemed to have become obsolete, then the matter was discussed collectively and the rule amended. Aunt Márta spent at least one hour a week with each class as they talked these things over, and also held one hour a week that she called ‘question and answer time’.” (Eszter Leveleki)