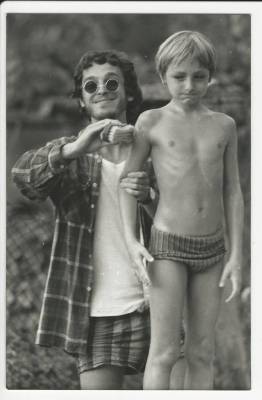 By the late 1960s, though campers still used the familiar form when addressing their regent, at her own request, they began referring to her as “Eszter néni” (or “Aunty Eszter”), as is the custom with elder women in Hungary. As the spinal injury she had incurred during the war grew worse with age, she found herself increasingly prevented from taking part in the camp’s more dynamic games, or maintaining a presence in the day-to-day lives of her charges. Thus, by the 1970s, the room monitors found themselves with a larger share of power, a circumstance that often led to abuses. In the “grey area” behind “Eszter néni’s” back, the laws of Pipecland were not entirely transparent, and the hierarchy of age and earned position was occasionally trumped by demonstrations of force reminiscent of a barracks or boys’ dormitory. Of these, the most common was the institution of the “shakedown” administered by room monitors. By this time, many campers were beginning to feel that the power of room monitors was based more on age, than on merit, and that their judgments were unfair. During the final years of the monarchy, some participants would express such feelings in the form passive resistance, or even open rebellion.