A World of Their Own 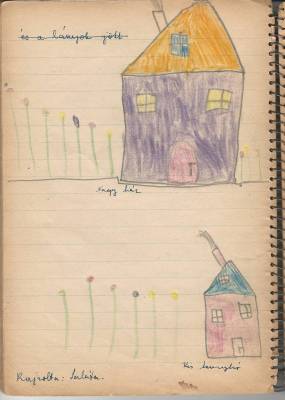 Campers experienced the Pipecland utopia as reality from the moment they arrived in Bánk. As time went on, this construction would yield a rich body of special traditions (known to campers as tradományok), which by unspoken agreement were regarded by all with great respect. The camp’s system of time-keeping (based on both daily, and seasonal rhythms) and officially drawn national borders acted to isolate campers from the world outside, while at the same time binding them together. All summer long, life was governed by the laws and house policies drafted by the citizens of Pipecland, their community existence founded on innumerable tiny, but solemnly upheld rituals, all of which were part of that special atmosphere with which the camp was associated. Pipecland had its own flag, a symbolic composite of the lake, forest, and all other places on its official map. Thus, the location was marked by the map and flag, the flow of time by the special camp celebrations, and the campers’ own separate world by the array of names and expressions used only in Bánk.

“It is the law of the universe that what you can name, you can handle – can feel your own – and thus have no need to fear. This is true not only for objects, but also people, even children.” (Eszter Leveleki)