A Time of Their Own 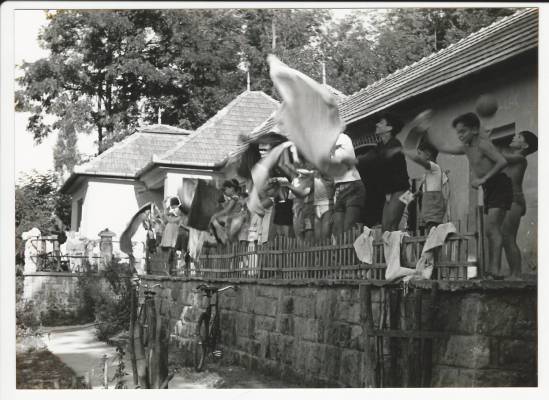 In Bánk, the camp’s own borders, society, and language were paralleled by its internal view of time. The era that lasted from 1938 until 1943 went by the name Happy Holiday, after which there was a year’s pause due to the war. For the year 1945, the children were transported to the town of Szilvásvárad by Russian soldiers. Then, in 1946, the camp in Bánk reopened, giving birth to “Bánk time,” whose years were numbered using the same Roman numerals that subsequently featured in camp diaries and issues of the Bánki Béka Brekegi. In Bánk, time passed according to two separate rhythms. The first encompassed the entire summer, from July to September. Campers spent different lengths of time in Bánk, from two weeks to the entire summer, depending on the demands of their parents’ schedules and the depth of their pocketbooks. For the most part, however, children arrived in two groups, one in July and one in August, each of which remained for three weeks. Timekeeping began for the summer with arrival at the camp and concluded with packing and farewell send-offs at the end of August, though time was counted in smaller increments and according to other rhythms, as well. Weekly and daily time-keeping featured morning time, day time, and evening time, weekly letter-writing time, clean-up time, and visiting time. While Bánk time was measured via programmes, role play games, and celebratory events and recorded through bulletin boards and photographs, day-to-day life was defined by the order of whistle calls, chores, rest-times, and meals that appeared in like-it-or-not lists and daily to-do charts.

Bánk Time
A day in Bánk in the 1940s
– Eszter wakes the company with a whistle call
– Morning calisthenics in the field
– Breakfast
– Tuesday letter-writing to the family or as an act of charity
– Swimming
– Lunch
– Rest-time
– Games: dodge ball, cards, coin games, volley ball, cops and robbers
– Supper
– Camp journal time (different person each day)